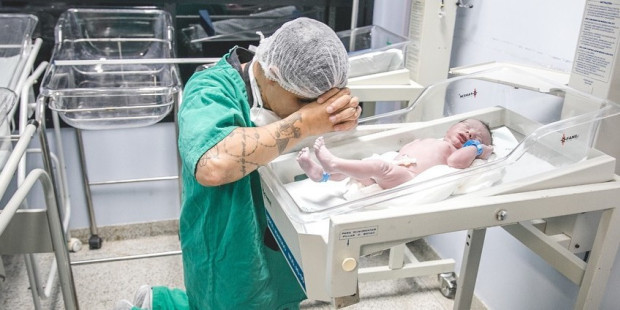 As theologians, we must say more than we can be, in the hope that others will make us more than we are. What is crucial is that we not write to justify the limits of our lives. — Stanley Hauerwas

Last Fall, I once told my students in a class I taught on prayer, “This class terrifies me, because I resemble little of it but aspire to all of it.”

This is the terrible beauty of teaching, writing and witnessing to our Faith: even as we give voice to its grand vision of life’s meaning and purpose, we find ourselves simultaneously judged before its impossibly high standards and lifted up by its exalted vision of who God wills us to be. Faith exposes us as both frauds and exemplars, as simul justus et peccator, “at once justified and a sinner.” St. Paul, Apostle to the Nations, expressed this tension wonderfully:

The saying is sure and worthy of full acceptance, that Christ Jesus came into the world to save sinners—of whom I am the foremost. But for that very reason I received mercy, so that in me, as the foremost, Jesus Christ might display the utmost patience, making me an example to those who would come to believe in him for eternal life.

One of my sons said to me recently, after we had spent over an hour talking about the heroism required to live Catholic sexual ethics in our culture, “Dad, is there anything the church teaches that you just don’t buy?” What an excellent and poignant question! It took us another hour to unpack. Though he and I have had many conversations about the reasonableness faith over the years, this was the most direct and personal question he had ever asked.

My answer was predictably a “yes and no,” with a mix of raw honesty and attempted nuance. We talked about squaring the depravity of clerical scandals with authoritative moral teaching, and then I shared my version of the Catholic “take” on the dialectics of faith and doubt, assent and dissent, as well as Catholicism’s use of philosophy as a way to submit faith’s claims to hard rational inquiry. We also talked about the role of prayer in exploring these questions. I said,

You can’t think your way into faith. Just as science demands observation, measurement, experiment, and the formulation, testing, and modification of hypotheses in its empirical method, so faith demands a willingness to engage in a “contemplative method” that’s open to God acting directly in the mind and opening it to His mystery.

[He asked, “Why?”] Because faith, even though it’s open to reason’s hardest questions, is in the end a gift that God must give — because faith admits you into the deepest mystery of God, which is beyond all empirical scrutiny. Augustine says, “I believe so that I may understand.” Faith as a relationship requires an act of trust in the other first. Only with trust can you be granted access to the other person’s inner mystery, and prayer is access granted.

What made the conversation both terrifying and exhilarating for me was that it was my son who asked this. I had spent the previous 21 years, with my wife and many others, trying to create an environment in which he — and our other children — could experience the color, texture, sound, smell and taste of a world informed by faith. A space where his emotions, imagination, intellect and freedom could grow into a free assent to Jesus Christ as the definitive meaning of all existence.

But now my son was, in effect, asking me: “Okay so, this world you created for me — Do you really believe it yourself? Do you ever doubt it? How do you reconcile it with the many other worlds out there?” We had taught our children that faith is to be fearless, that truth is one, and that the same God authored the mind and faith. So this conversation was exactly what I had always hoped for. And it was scary as hell, because it forced me to look through his eyes at the “I” that claims to boldly profess, “I believe in…”

I also realized in our conversation that such an honest exchange, such a vulnerable exchange, signaled another transition I had long hoped for: from father-son to brothers, from leader-led to companions on the journey of life, from guardian-guarded to friends (John 15:15). The same child who had long ago “ripped fatherhood out of me,” who taught me how to love in a way I could never known without him, had also ripped faith out of me and taught me to believe in a way I could never have known without him. His very existence — his face, his questions, his trust, his innocence, his doubts, his struggles, his sufferings — is the voice of Jesus asking me in every moment: “Thomas, son of Edmond, do you love me?” “Who do you say that I am?”

And a little child shall lead them — Isaiah 11:6

{This final story I will share is shared with permission}

Years ago, when we lived in Brandon, Florida, a man joined the RCIA program I was in charge of at the time. He was married with three children, was baptized Catholic, but was not raised in the faith. When he explained to me why he wanted to return to his faith, he said, “My daughter is about to receive her first holy Communion, and when she asks why I don’t go to church, I really don’t know what to say.” He went on to say, “But just last week, she asked me with the most sincere expression, ‘Daddy, do you love Jesus?’ I was frozen and just left the room. I told my wife later, I need to give her what she wants from me. And so that’s why I am here. I want to have faith for her.”

Just before his first Confession, he met with me to discuss his journey of faith over the last 8 months. Among many things, he said, “The best part has been that I came in to find faith for my daughter, but now found it for myself.”

As parents — like all Christians who risk giving public witness to personal faith — we must always be willing to say more than we can be, in the hope that others will make us more than we are. What is crucial is that we not simply live so as to justify the limits of our lives.

4 comments on “Willing to say more than we can be”

This site uses Akismet to reduce spam. Learn how your comment data is processed.